Thanksgiving was ok. Momma and Daddy went to Gramma and Papa’s house, so there was a lack of cuddling on Thursday. But Gramma did send us some leftover turkey, so it was ok. Oh, and I ate part of the pumpkin pie that Daddy made. He left it in the oven with the door open to cool off. He heard a funny noise coming from the kitchen. When he went in there, he saw me standing on the oven door (which was only cracked a little bit), snacking on the pie. It was yummy!

Momma was off on Friday, which we took to mean lots and lots of cuddling. We were wrong. Ever so wrong.

On Thursday night, the PTU’s came out. They sat in the hallway all night. Me and EG played in them a little bit and then I took a nap on the fuzzy blankie in mine.

Friday morning we cuddled and cuddled with Momma. She got up and started digging for gold in the litterboxes. Which she does every morning, but this morning she was mumbling something about “samples“. Unfortunately, she didn’t find any gold. Heh heh And she didn’t find any “samples,” as she called them, either.

Pretty soon, Daddy picked me up and put me in one of the PTUs. He didn’t get it zipped up in time, so I ran out and ran under the bed. Momma played the old, open-the-food-container trick and I ran right out. I did get a small snack out of it. Daddy put me back in the PTU and Momma sprinkled a couple pieces of kibble in there, and Daddy zipped it right up. Then he picked up EG and put him in the PTU. Only EG hates the PTU and went all rubbery. Daddy tried to put him in the PTU and he hopped right out. After four tries, Daddy held EG’s body and Momma held his legs and they got him in there and zipped him up.

Then we got in the car. It was ok. EG cried a little bit, but not too much. Then we got to a place that I hadn’t been to in a long, long time. It was the V-E-T’s office. Grrrr. Momma signed us in and filled out some paperwork. Then Jennifer, the really nice receptionist, said that they had three emergencies that day, so it would be a little bit before we could see Dr. P. Momma said that was ok - she and EG had been in for emergencies a couple of times and people had to wait for them.

We spent the time checking out some Westie dawgs - Annabelle and Mozart. They were ok, but kinda hyper. There was a Dalmatian that came out of one of the rooms. His mom told Momma that he bites. Momma got annoyed and asked if he was going to bite her or us kitties. The lady took him out to the car. While they were outside, Momma went on and on about how people need to keep their dawgs on a short leash, especially if they’re snippy to other people or pets. Daddy started to get embarrassed. Then Daddy, who was looking out the window, said, “Oh, no. They’re carrying in a big dawg. I think it might be another emergency.” There was a lady carrying in a big, black dawg. Momma jumped up and grabbed the door for her. As soon as they got in the door, the lady put the dawg down. She said that he hated going to the V-E-T and refused to get out of the car, so they had to carry him inside every time. Momma giggled a little. His name was Moose and he was really askeered. He was shaking and shaking and trying to get outside. Daddy went over to pet him because he looked just like Titus, only black. Then Daddy went into the adoption room because there was a cat in there named Lucky. Jennifer, the really nice receptionist, said that he was really lovey and cool. Daddy picked him up and cuddled him and wanted to bring him home. Momma said that Titus wouldn’t like that very much. And he was a Maine Coon. And we’re a little askeered of those Maine Coons after the way they took over the Top 100 Cat Sites.

Finally, we got taken into another room. This lady pulled EG out of the PTU and put him on the scale. He weighed 10 lbs, 12 oz. Momma was soooo happy that he finally gained the weight back that he‘d lost last spring. Then the lady pulled me out of the PTU and put me on the scale. I weighed 11 lbs, 1 oz. Daddy giggled. Momma told him not to tease me. The lady double checked what we were there for and then said the doctor would be in soon.

Dr. P came in and EG was hiding behind Daddy’s coat. Daddy picked him up and put him on the table and Dr. P said he looked really good. She asked how he was doing and was surprised to hear that he was the bully of our house. She giggled and said that it was good to see him feeling 100%. She looked at his eyes and ears and teeths and said he had great looking chompers. She said that he was a good weight and that he looked very healthy and his heart sounded great. Then she took him in the back. I don’t know what happened back there, so I’ll let him tell you.

EG:
So Dr. P took me in the back. I didn’t get anything stuck in my spot #13 - I was glad because I had that done before and it sucks. But she stuck a giant needle in my shoulder and then again in my booty and it sucked. Then she stuck a gianter needle between my shoulders and shoved a homing device in there. It sucked. Then she brought me back in the room with Dad and Tazo and That Woman. I gave them the stink eye, but it didn’t matter to them at all. I told Tazo to run - run fast and run far, but she was too askeered and just sat there.

Tazo:
So Dr P, looked in my ears and eyes and at my teeths (which she said were as nice as EG’s). Momma asked if I was c-h-u-b-b-y (which I don’t know what that spells), and Dr. P said that I was a little. She poked at my sides and said that she could feel my ribs, so Momma should just keep an eye on my and try to really control my snacks. What snacks?! I never, NEVER, get snacks. Only what I steal off Daddy’s plate,well, and that pumpkin pie but that shouldn’t count. Grrrrr. Then she told Momma and Daddy that the results for the blood tests for leukemia and FIV would take about 10 minutes and if that came back ok, then I’d get my shots and microchip. What?!

So she took me in the back room and there was this dawg back there hollering and hollering. I’m not used to that, so I tried to ignore it. It just made me askeered. This lady held me on her lap and STOLED MY BLOODS. Out of my leg!!! And I hated it. It hurted and it messed up my furs. Then Dr. P stuck a giant needle between my shoulders and shoved a microchip in there. It hurted. But I didn’t cry because I didn’t want that whiney dawg to hear me. Because I’m way braver than a whiney dawg.

Then the lady took me back in the room with EG and Daddy and Momma. She told Momma that I was a really good girl in the back. She said that I just sat on her lap and let her STEAL MY BLOODS. She handed me over to Momma and I was never so glad to see her in my life. Momma stood there and held me and walked me around the room until Dr. P came back in. Dr P said that the bloods that they STOLED from me were negative - whatever - so I could have my shots. My what?! Then Momma sat on the bench and let Dr. P stick ginormous needles in my shoulder and booty. It was horrifying. But I was good and just let them do it. I figured the sooner they were done, the sooner we could go home.

Another lady came in there with a bag of stuff. She scanned our microchips to show Momma and Daddy how they worked. Then she said that our homing devicesmicrochips paperwork was in there - along with our flea drops. What?! Apparently someone blabbed about Titus bringing in that flea on his head that time, so Momma got more flea drops. I hate flea drops.

Finally, we checked out and Momma paid about a squillion dollars and we got to leave. We dropped Daddy off at work and Momma took us home. She opened up the PTU’s and we jumped right out. Titus came over and sniffed and sniffed and sniffed us. Then we took long baths to try to get the V-E-T germs off of us. Then we all laid on the couch and watched TV and took naps. Whew! It was a long afternoon. We’re glad it’s over.

In other news, Kallie, sister of our grate friends Jeter Harris, Matsui, & Mickey Mantle, went to the Rainbow Bridge on Thursday. We're sending lots of hugs and purrs to them. Rest in peace, sweet Kallie. 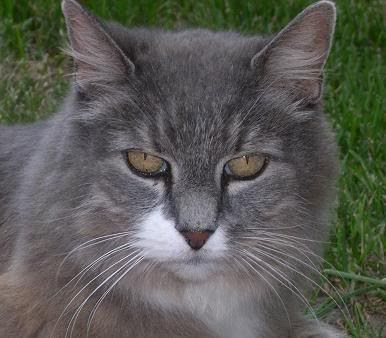