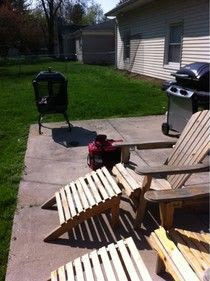 See the PTU? On the patio? OUTSIDE?!?!?!  That's me. It was awesome! The Mom was gone yesterday morning and Dad tooked me outside in the PTU.  I had a blast!

But then The Mom came home and opened the door and I ranned outside. And then she gotted mad at me and Dad. So now I'm on lock down again. Dad says he's build me something so I can hang out outside this summer. The Mom isn't that thrilled with the idea, but hopefully, he can talk her into it. The Mom was reading The Meezers' bloggie today and she thinks that Meezer Mom's idea of the bungee cord on Billy is an awesome idea. Purrsonally, I think it's awful. We need to not let her read other bloggies from now on.
Posted by The Furry Kids at 8:57 AM